Would anyone know how to prevent Exit Code 137 from happening?
We have about 50 builds in a day and getting Exit Code 137 2-3 times a day on some of them. Unable to determine root cause

Each our pipeline runs on a m6a.2xlarge nodes with 8cpu, 32GB ram (request is 5cpu, 6gb ram per pipeline). Containers show memory utilization well below 4GB so we have a huge headroom 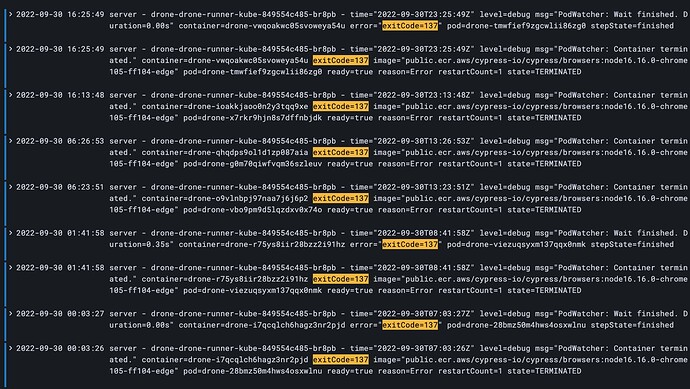 there are 3 reasons you can have a 137 exit code

also note that the kubernetes runner is not recommended for production use due to it being a community contribution, having a beta status, and overall instability at this stage. If you are looking to setup a product installation, we would strongly recommend installing the docker runner on kubernetes (for which an official helm chart exists).

Hi @brad
Thanks for replying!

We verified the below:

Here’s a snippet of my .drone.yml. There are “4” workers and they all run in parallel via depends_on step (pipelines are copy and paste)

When using our docker runner, if there is an oom kill, you would see an entry in our logs:

You can install the docker runner on Helm using this chart:
https://github.com/drone/charts/tree/master/charts/drone-runner-docker

The Docker runner is stable with optional commercial support. The kubernetes runner is experimental and may require your team to get hands on with the code to triage issues. Just something to consider as you ramp up your usage.

Thank for the links!

We’ve also determined that right before the 137 errors happen, the drone server pods appear to churn.

Is it possible to run more than one below?

There may be some exceptions to the rule, but if the Drone server goes offline, the runners are designed to continue executing pipelines that are in-progress. The runner uses an exponential backoff to reconnect to the server and publish pipeline results once it comes back online.

Because Drone uses an embedded queue you cannot have multiple replicas of the Drone server at this time. But since runners are generally resilient to server outages, you should just need to make sure the server automatically restarts if it goes offline.

Thanks for the helpful explanation!

We managed to reduce the number of Exit 137 errors by increasing the replica count of the runner + making our auto-scaler less agressive.

However, when they do happen, we notice the drone server pod usually churns down & restarts (about 20s - 1m) right before the OOM kill on the test-worker container. Any way to prevent this from happening?