The advantage of Serverless Framework is that it not only packages your serverless function for you, but it will also deploy it, and, in some cases, give you the Infrastructure-as-code to create/update the stack associated with the serverless function. However, there are a few issues with it that I’ve noticed:

Fortunately, Harness has all of these abilities.

This article will be the first in a series of how to leverage Serverless Framework and Harness together, starting with AWS Lambda!

Serverless Framework requires a few things for it to work correctly, namely Node and NPM. Additionally, to do this whole integration, we will need Git, AWS CLI, and Python. The way we will start this out is with a delegate profile (assuming you have a delegate already stood up in the AWS VPC and the AWS Cloud Provider is setup in the Harness account. If not, then check out this doc first Harness Delegate Overview - Harness.io Docs and this doc second Add Cloud Providers - Harness.io Docs).

You’ll put the name at the top (Example: ServerlessFramework) and then use this info: 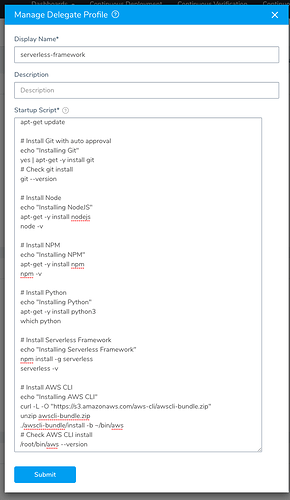 Then, you’ll assign the profile to the desired delegate (look for a section in a Delegate in the delegate list called Profile). Once there is a timestamp and the logs for that show that everything downloaded correctly, you’re ready to move to the next step.

This is the part where the main integration comes together between Serverless Framework and Harness.

The initial step here is actually outside of Harness. You’ll need to go to your S3 bucket and grant a specific user to upload a .ZIP file. Next, you’ll need to go to the git repo that stores your Serverless Function with the serverless.yaml file inside, grab the git clone link, and also get the Personal Access Token for the account as well.

Once inside Harness, you’ll need to set up three secrets in the Harness Secrets Manager:

These will be used a little bit later for the packaging process.

The next step is to go to the Template Library for the Application in Harness and you’ll create a new Shell Script there (follow this doc if you need some guidance on that: Account and Application Templates - Harness.io Docs).

This script will essentially be the Serverless Build and Package script that will finish with uploading the Lambda ZIP file to the S3 bucket and then Harness will deploy it out natively from there with your choice of verification (We will be using CloudWatch in this case).

This is the script you’ll want to use, and make sure you customize it for your specific use case and environment:

You’ll want to test the git clone out first on your local computer to know which folder you’ll need to cd into in the script.

Once the script is done and added to the Template Library, it is time to put it in the Workflow 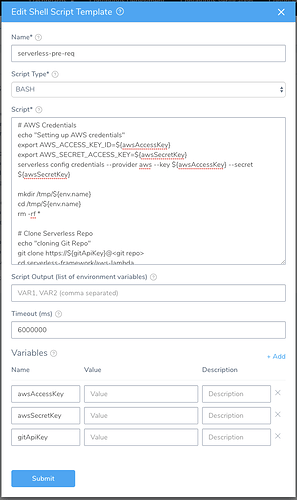 Also, one of the important pieces here is the three variables at the bottom of the screenshot. Make sure that they exist in the script as well.

The rest of the process is essentially going to use native Harness abilities and allow for a separation between Serverless Framework as CI and Harness for CD. The initial step here is to upload a zip file as the Lambda artifact in the S3 bucket, if you have not already. Once this is done, we will build out a Harness Service for Lambda (follow this doc: Add Lambda Functions - Harness.io Docs).

The next portion is simply setting up the Environment(s) for the Lambda deployment. Follow this doc for more: Define Your Lambda Target Infrastructure - Harness.io Docs

The next piece is one of the main parts here, which is building out the Workflow for Lambda to deploy out for you. This doc will walk you through the main steps of building the workflow (Create a Basic Lambda Deployment - Harness.io Docs) and then we will add the Serverless Framework section as a pre-deploy step.

Now that you have the Lambda deployment in the Workflow, you’ll want to add a pre-deployment step where we reference the Template Library script we built out before by clicking the Link item in the top right 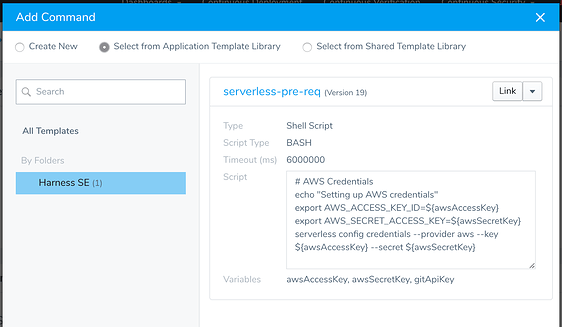 Then, once that is linked to the workflow, you’ll want to link the secrets that we added in the beginning of the doc: 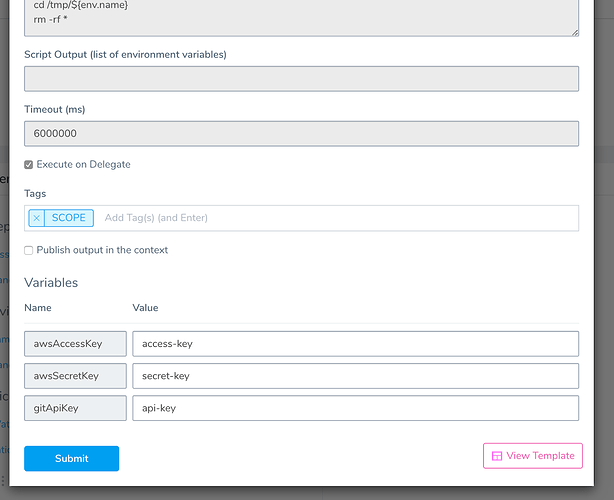 And you’ll also want to add the tag that you assigned to the delegate to the Tags section here to make sure that the script is executed on the same delegate that the Delegate Profile is assigned to.

Adding your verification process is pretty simple, especially with CloudWatch (which is the recommended Verification tool for Lambda, btw). Just follow this doc and you’ll get that set up: 5 - Verifications and Troubleshooting - Harness.io Docs

The final step, and probably the most fun, is deploying! Kick it off and see how it works out. There might be a couple nuances to troubleshoot from the script, but other than that, you are all set!

Thanks for the stellar contribution as always!

Impecable timing with this article as well! So many customers have asked about the Serverless Framework and how to leverage it in Harness. Our Delegate can handle it!