I was reading this discussion Parameters When Promoting A build and I still cannot get KEY/VALUE pairs to work.

This is the pipeline:

and this is the output:

I set two variables, SOME_VARIABLE and ANOTHER_VARIABLE, both appeared in the log output from the env command. 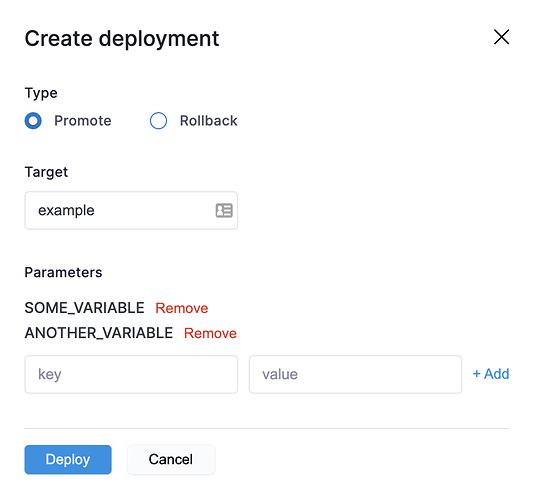 In the past I have forgotten to hit the “+Add” button when adding variables, any chance that could be the issue?

(Sorry for the delayed reply - had to go down other rabbit holes.)

Yeah, I’ve been caught out by missing the ‘+Add’ button in the past - definitely bad UI design. But no, that is not the problem here.

I tested with ‘promote’ and yes - it works, just as you say.
But I was trying to pass KEY/VALUE pairs in the initial build. That is the bit that doesn’t work. Surely, for this feature to be useful it should support passing these variables at build and promote.

@d1wilko can you please check the frontend code to see if we are passing build parameters as query parameters when invoking the API to create a new build?

Apologies for the delay in reply I have rejoined the drone team after a secondment!

I did a quick test in cloud.drone.io (which is an earlier version but it should be fine)