Workflow failing because not able to resolve expression as ternary operateror ( ?: ) is not supported

Today I would like to discuss a use case from one of our customers. They have encountered an issue when evaluating ternary operator (? : ) conditions during variable declarations. We have found that this is a difficult problem to resolve.

I would like to discuss ways to address this issue and brainstorm solutions that could potentially helped us solve this problem.

We want a workflow that can be used both in a a pipeline, and as a standalone workflow for manual triggers. The workflow has a wrap-up step that sends a Slack message with the name of the person that is responsible for the deployment. It is done by using both of these variables:
${pipelineApproval.approvedBy.name} (${deploymentTriggeredBy})
And the workflow/slack script step will fail if the workflow is triggered manually, because then the ${pipelineApproval.approvedBy.name} variable is not set.
(Bad substitution error).

Here is the Shell script to set the Approver: 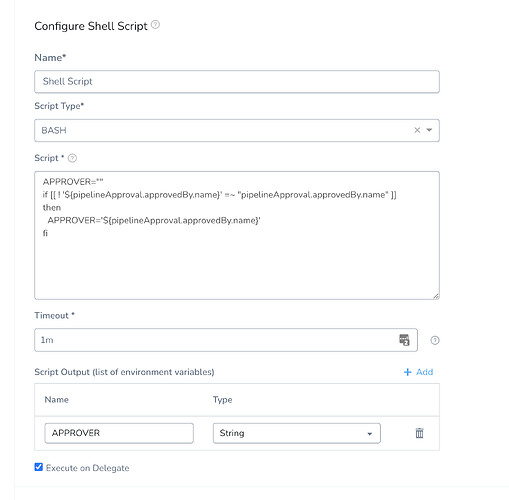 Note: you would need to enable “Publish output in the context” with the name APPROVER to be referenced further in workflow/pipeline.